Partickpebbles and myself got last night to go and hang on our local woods. We were planning on walking to the woods as its only a 1 or 2 to get there but due to a RTA and the motorways being jammed solid it took a lot longer to get home then usual so we had to drive to the wood.

We dumped the car in the usual spot and walked in to the woods across the fields. The farmer who owns the woods, also has the fields we have to cross so all is good permissions wise. 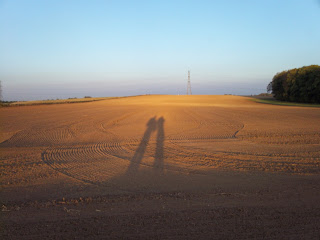 Got in to the woods and notice it was quite a bit darker in there. The camera does make it seem even darker. 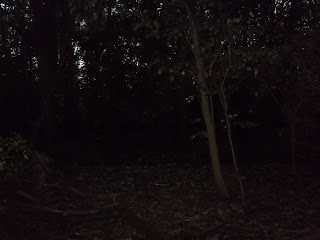 We got the hammocks pitched quite quickly and did wonder if we needed the tarps but decided as we were away from the family, a sleep in would be a good idea so put the traps up so it would not be as light in the morning

Then we started to get the fire going. I had collected some dry grass earlier in the week and had left it in my car so it was really nice and dry and ready to use. I got Partickpebbles to practice using a firesteel on a piece of amadou I brought along in my fire kit, he didn't have much joy with that. Whilst he was doing that i got lots of twigs and small bits of wood ready for the fire. He then tried getting a spark on to some char cloth which worked. Then he put that in the dry grass and after a few blows we had fire! 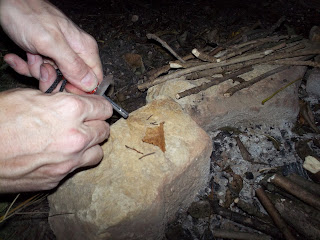 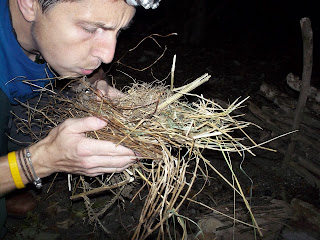 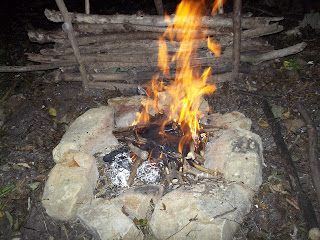 This was Partickpebbles first fire with out matches or lighter, so well done!

After the fire was going we settled in to cook our tea, burgers and onions wrapped in foil and yummy it was washed down a nice red.

We have been using these woods for nearly a year now and have never really seen or heard any wildlife apart from birds but last night we heard a pair of owls and I saw an owl scat as i put my hand in it in the dark :p  It was about the same size as my thumb but twice as long.  There was also something else moving through the woods last night, we did not see it but heard it a few times.

Woke up this morning feeling really refreshed for a great night out in the woods.  Roll on the next time.
2 comments:
Email ThisBlogThis!Share to TwitterShare to FacebookShare to Pinterest
Labels: Bushcraft, Hammock
Newer Posts Older Posts Home
Subscribe to: Posts (Atom)