My Exotac nanoSTRIKER XL I won as a prize from the Wilderness 1-2-1 competition arrived in the post and I have to say I'm very impressed with it.

It arrived in a nice little box with no annoying plastic covers on like a lot of products do nowadays.

On opening the box I liked what I saw. Mmmm orange. It feels well made and very solid. 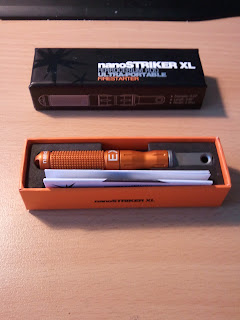 In the box is the striker, instructions, lanyard and a small big with 2 spare washers and the ring to attach the lanyard. 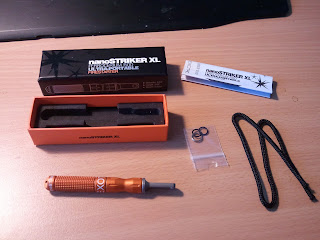 As with all strikers its about getting the angle right and after 2 attempts I was producing a good shower of sparks. I haven't had time yet to get outside and try to get anything lit with it yet. Think that's going to be next weekend so I can get some pictures or a video clip as its still to dark when I get home from work during the week. 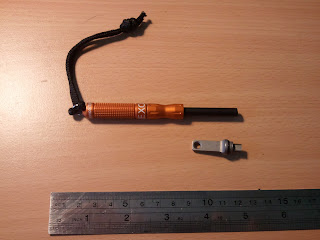 I have had a play with the Exotac nanoSTRIKER and I think I prefer the XL. The actual striker is a bit bigger in the XL and I found it easier to hold and to use. Maybe I just have big hands and am clumsy :p

All in all a quality bit of kit so far.
Email ThisBlogThis!Share to TwitterShare to FacebookShare to Pinterest
Labels: Bushcraft, fire, kit

Good Job! I did wonder who won. Lucky bugger :-)